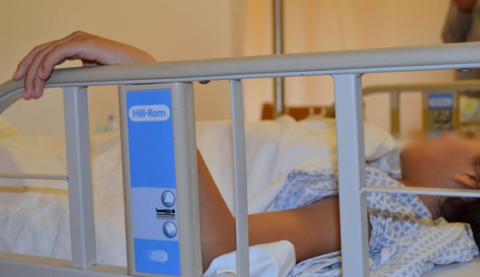 The story of Hanan, 14 years old, began a few years ago when her mother noticed in her daughter a slight bend in her back when she stood up. As Hanan grew, this curve soon increased significantly, accompanied by difficulties in walking and breathing. Hanan was diagnosed with severe sprain in the spine, which exceeded 60 degrees. Surgical intervention was the only solution for this condition, a delicate and costly intervention. “I had reached a point where I could no longer do anything to save my daughter's life,” says Hanan's mother. "But I had hope."

The cost of the surgery was beyond our ability to pay for it, adds Hanan's mother, saying, "At this point, parents feel helpless, and that is a very difficult feeling." In less than a year, the convolutedness in Hanan’s spine had increased to more than 70 degrees. There was a real danger to her lungs. She was forced to stop going to school, and we realized then that it was urgent that something was done. "Hanan's medical file was one of the emergency files being followed by UNRWA, and all our hopes rested on their aid."

"My daughter was given a new chance after more than six hours in the surgery room, and Hanan was able to walk again... My joy is indescribable. It is hard to express my deepest gratitude and thanks to all those who have helped my daughter to be reborn.”

The campaign launched by Taawon-Lebanon with UNRWA during Ramadan succeeded in raising the needed amount to complete a delicate spinal operation to save Hanan. The surgery was successful, and Hanan was able to walk again after she left the hospital.

Thanks to everyone who helped save Hanan's life, and for your warm hearts and your kind and generous gifts!