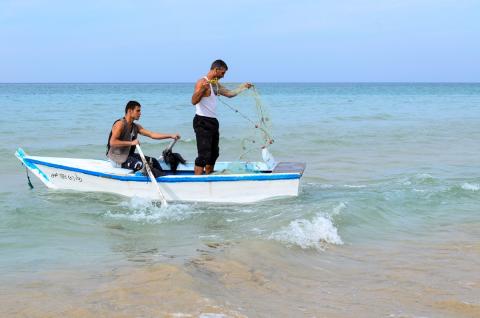 This project aimed to improve the living conditions of the most marginalised families and their children in Jal El Baher gathering in south Lebanon through small grants.

Waleed Darwish, 40, lives with his wife and three children in Jal El Baher gathering near Tyre. He makes his living from fishing, a precarious business, especially for Palestinian refugees like Waleed, who must follow many stringent legal requirements and conditions. For example, Palestinian fishermen are obliged to work with a Lebanese partner, who is normally the owner of any boat, and may charge the Palestinian fisherman for his use of the boat as well as demand that the catch or income is split between the partners.

Luckily, Waleed is a very talented and experienced fisherman. He benefited from Welfare Association’s previous livelihoods project in Jal El Baher, when he took a grant/loan of USD $750 (70% grant, 30% loan) to purchase new fishing equipment and supplies. However, he has only been able to pay back 50% of the loan so far due to his difficult economic circumstances, exacerbated by the recent heavy winter storms which prevented any fishing taking place and caused damage to Waleed’s home, fishing equipment and tools.

Selected to benefit from this new livelihoods project, Waleed received USD $381 of new equipment and supplies in April 2015. He selected two new nets, one with holes of 30 mm and one with holes of 45 mm, plus a selection of rope, floats and weights.
On 20 April 2015 at 9am, Waleed got permission from his Lebanese partner to use the boat in order to go fishing and try out the new nets. Later that day, at 4pm, Waleed called his son and a friend to come help him offload his catch. He had caught 1500 kg of fish in just one day, compared to an average “good” catch of 100-150 kg!

As per Waleed’s agreement with his Lebanese partner, he kept half of the catch (750 kg), which he sold locally for $5.33/kg, earning $3999 in revenue. Waleed was extremely grateful to Welfare Association for this timely assistance, which has brought him such luck and income. Not only will he be able to pay off his unpaid debts now, he will be able to better afford his family’s daily living expenses. Waleed, like many other fishermen who benefited from this project, praised Welfare Association for not forgetting Jal El Baher or making so-called “false promises” (which they said other NGOs did).