The health award launcher for the first time in 2017 to improve the health sector in Palestine and in the refugee camps In Lebanon, and aims to support creativity and excellence in the health sector by encouraging competition to improve the quality of health services and to adopt the creativity and innovative methods and mechanisms of modern treatments especially for patients with major chronic diseases.  .

The Award is funded by generous support from the family of late Ahmad Abu Ghazaleh. 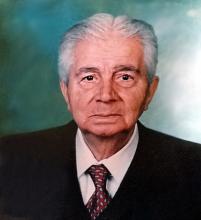 The Award is funded by generous support from the family of the late Ahmad Abu Ghazaleh.

The late Ahmad Mohammad Abu Ghazaleh was born in Jerusalem. In 1916. He was raised and studied in Jerusalem and Aley College in Lebanon. He worked with his father trading in foodstuffs, tea and seeds until the year 1948. After the Israeli occupation, he left with the whole family and established a new business in Cairo. In 1954, after the Egyptian Revolution, he had to leave with the family again and start a new business in Kuwait. He established a new company specializing in foodstuffs, vegetables and fruits. It became one of the biggest companies in the area. Until his death in the year 2000, the company, with the help of his sons, had
flourished and acquired other big companies and spread all over the globe. His legacy is carried on by his sons until this day.