“Positive energy is important in our current climate of cynicism and indecision, in a country that’s under occupation, where there’s little self-value or self-confidence. We wanted to make a statement that we’re here to stay.”

“I was not able to live in the house because it lacked basic necessities. I was always staying with my family and only returned to pay the bills. Now, I have returned to my house that I was married in decades before, and it is more beautiful than before, thanks to Taawon.”

Rehabilitating the Old City of Jerusalem

Carpentry is part of who I am, and was passed down to me by my late father. We have a small workshop that reupholsters sofas. The Wajd training program gave us a chance to expand our operations and be self-reliant.

“Do what you love” 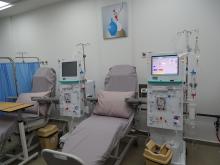 “I can’t afford treatment in private hospitals so this service is my last resort. I come 3 days a week. Every treatment session lasts between 4 to 5 hours. Myself, and patients like me, face many problems. The unit provided a radical solution for Palestinian patients in Lebanon.”
Kidney dialysis center in al Hamshari hospital in Saida, Southern Lebanon offers free treatment to around 80 Palestinian patients.
Mohammed Al Mahmoud, Kidney dialysis
Patient- Lebanon
Treatment in private hospitals

Zamala fellowship program is different than any other program because it is genuinely funded and managed by Palestinians. It has a positive impact on building international partnerships, production off research and articles and exchange of knowledge to be transferred in Palestine.

“The bridge summer school has enabled me to learn about the cultural and historical aspects of Palestine and to develop strong leadership skills.”

Khalil Fahjan – from the Gaza Strip

“The visual arts writing course taught me a new language for discussing all that is seen disassembling symbols, understanding their contexts, deciphering their historical and sensory meanings. The intellectual references of the course enriched the writing process and gave the course a dimension often missing from the Palestinian cultural scene, which often shies away from interpretations.”

Remedial Education has provided me with a new opportunity to improve my life and have a feeling of self-esteem. It has opened up the prospects of success for me. I hope that I will finish my studies and move forward towards the job market and future.

Opportunity to improve my life

The children enrolled at Al-‘Amal Kindergarten, that is benefitting from “Sukkar” Programme, stand out due to the spirit of initiative, individual as well as group responsibility, and cooperation. Yes, I see here children “who have been subjects of a lot of development and education”, and who are diligent and clever in their school. Nevertheless, I assert that the less-celver students are the most proactive and effective among their classmates. I feel that they previously enjoyed freedom in their kindergarten and preschool; the fact that has positively impacted the character of each one of them. After I realized that the quality of children finishing preschooling at Al-‘Amal Kindergarten and enrolling at Al-Be’neh Primary School has improved thanks to Early Childhood “Sukkar”, I am feeling comfortable that children in my village have recieved quality education. I hope that the impact of the program will not be limited to the children preschooling at Al-‘Amal Kindergarten, but it will encompass all the children in Al-Be’neh in the future. 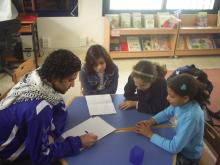 As a program officer for a grant-funded initiative deployed by Welfare Association, I have had the great pleasure of working with the Cultural Programs team at WA. The team continues to impress and inspire me with the progress they make despite working in some of the world’s most challenging environments. The team brings a true vision of what they want to accomplish, and the intelligence, creativity and commitment to put those plans into action. If you want to support sustainable community development in Palestine, Welfare Association is the organization to work with.